Very proudly presenting yet another amazing cover by Chris Weston! When this fell out of my subs envelope on Saturday I actually gasped, both at it’s stunning execution and the gravity of the situation! Day of Chaos indeed!

Over to Chris to tell us more:

“This is the brief given to me by Tharg:“In the current Dredd story, terrorists fire missiles at the Grand Hall of Justice – so I was thinking of a cover image of missiles in the foreground (our view being slightly behind them) streaking through the city towards the Grand Hall in the background, with perhaps a target symbol over it. Lots of speed and impact.”As ever, I probably spent an hour after that, staring into space in despair, wondering: “Where do I begin?”Eventually, I probably got bored with my relentless self-pity, gave myself a quick kick up the arse and fired up Cinema 4d to produce this 3d model…“ 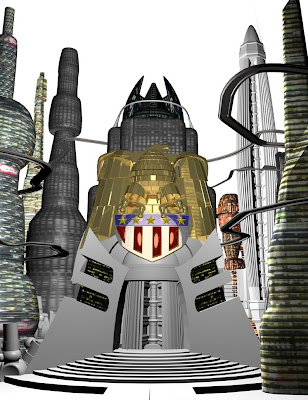 “I then created a rough missile model, which was montaged with the Hall of justice to create the rough that was presented back to Tharg.“ 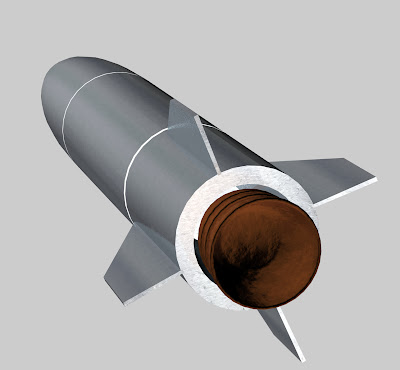 Below is Chris’ rough. Wow… 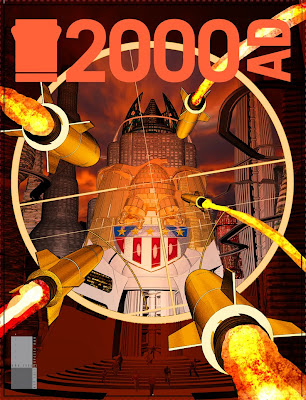 “Our Betelgeusian over-lord deemed this effort worthy of the front cover to the latest edition of his “survival guide for the future”, and I began the task of lightboxing the rough into a hand-drawing…“ 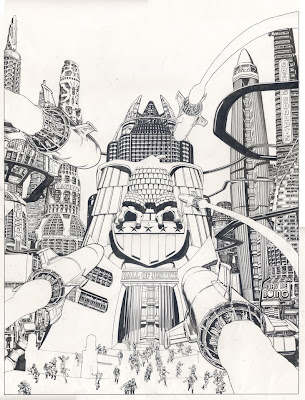 “This was combined with elements from the 3d models and the roughs to create the finished piece.”

I took the time to ask Chris the meanings to those block names and he was happy to oblige. “I like Mega City One to have a cosmopolitan feel, so some of the city-blocks are named after a couple of european friends I’ve made through foreign conventions and correspondence: Javier Cuevas and Fabio Maglione. Grissom Block was a tribute to Virgil “Gus” Grissom, one of the original Project Mercury astronauts and who tragically perished during a pre-launch test for the Apollo 1 mission. For reasons any amateur armchair psychologist could probably explain, I’m drawn to the tales of heroic failures, factual or otherwise; the pioneers who ended up with arrows in their backs are every bit as noble as the ones who didn’t.That notion seemed to chime with a cover that showed one of Justice Department’s more challenging setbacks.The Palais De Boing was there to acknowledge John Wagner’s constant inventiveness throughout these past 35 years. I like to cram in as many references to past stories as possible.“

So there we have another fantastic cover and fascinating commentary by easily one of the best artists working today. A massive thank you to Chris for his continued support of the blog and services to Thrillpower in general. Please visit his blog here.