Wow, far out man! What an amazingly trippy cover! In recent years, 2000AD has been lucky enough to welcome back some of it’s most beloved and talented creators; McMahon, Higgins and Sharp springing to mind. The latest artist to triumphantly return to the galaxy’s greatest can only be described as a true visionary, who’s incredible styles across the years have always been uniquely his, the true legend and genius that is Mr Brendan McCarthy.

Despite co-working (with the wonderful Brett Ewins) on a host of classic covers from as early as Prog 33, Brendan’s first actual credit in 2000AD is back in 1978, a somewhat surreal Walter the Wobot tale in Prog 81. This skit of the old Charles Atlas body building comic ad saw Dredd’s rather annoying wobot… I mean robot, sunbathing with a lady robot before almost becoming ‘Hewo of the Beach!’ 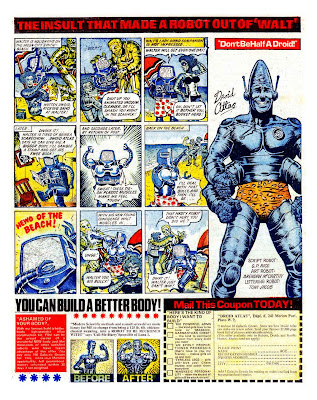 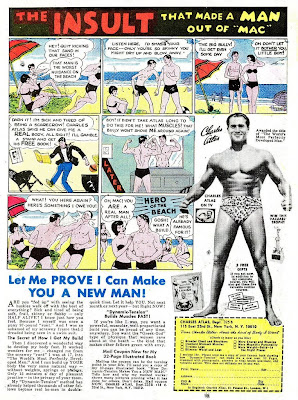 This strange tale was followed a fortnight later with Walter getting glasses(!) and being mistaken for Elton Droid before being fed to Mek-Quake. Unfortunately the little twerp survived.
Brendan worked on many, many classic strips for 2000AD including ABC Warriors, the brilliant Sooner or Later, Zenith (in the design stage), Bad Company, The Human/Phlondrutian Phrasebook and of course, Judge Dredd. Some of his Megacity highlights include Judge Cal, Atlantis, Riders on the Storm, Oz, She Devils, Report to the Chief Judge on the Accidental Death and, more recently, The Walking Dredd and Mr What?
Outside of 2000AD, Brendan worked on some incredible comics such as Rogan Gosh, Strange Days, Paradax, Spiderman and, one of my favourite graphic novels ever published, Skin. Below we see a recent commission (for my lucky mate David Rees) featuring many of Brendan’s creations as well as a beautiful image of Martin Atchitson from Skin. 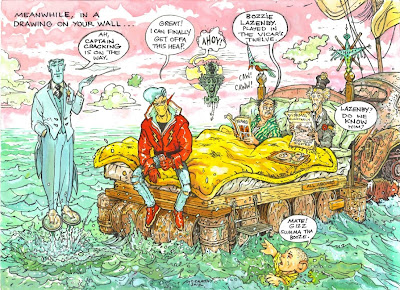 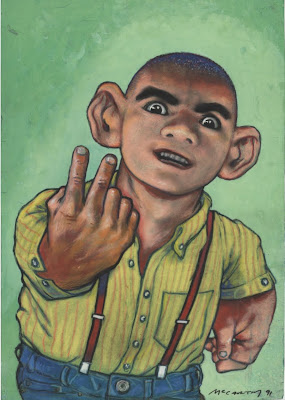 Comic work led to Hollywood with the artist working on some very high profile movies such as Coneheads, The Borrowers, Lost in Space, Teenage Mutant Ninja Turtles and Highlander among others…
Back to 2000AD and Brendan’s latest project is the wonderful Zaucer of Zilk, with writer Al Ewing. Brendan seems to be enjoying the collaborative process, saying “Al Ewing brings his own brilliant take to the writing style too. A man on the move up the ladder to the Attic of Achievement and then onto the fabled Roof of Riches!“
The strip is a beautifully rendered, mind meltingly surreal glammatronic phantasmagoria! Over to Brendan to tell you more “The series is meant to be in the tradition of ‘Sooner or Later’ and ‘Hewligan’s Haircut’ – a bit quirky and ‘British’. It’s been described as “The Mighty Boosh meets Harry Potter”. It has that surreal Pete Milliganesque flavour to the script.”
Below is the rough for the cover of the first episode, Brendan said “Tharg wanted a Zaucer of Zilk cover to launch the series. He wanted a group shot with all the main characters and some suggestion of the glammatronic delights to come.” 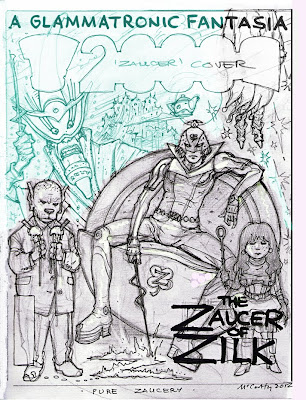 And below is the amazing finished cover, just eye-poppingly beautiful…

Brendan was also kind enough to send some of his amazing design sketches for the story which are just downright astounding! He says “As you can see, the Zaucer ‘s costume is derived from Judge Dredd’s, with the pads, boots and ‘helmet’ motifs, but madly messed around with. There’s a bit of Batman and Spider-Man in there too. I wanted the visual style of the cover to reflect the ‘digidelic’ look of the strip, and make it stand out as ‘different’.“ 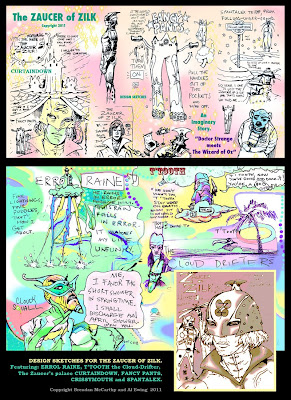 Brendan spoke more about his emerging ‘digidelic’ style at the Kapow convention last year when discussing the brilliant Walking Dredd cover shown below:

He said “I hadn’t done comics for about twenty years and wanted to get my mojo back. I’m trying to work out how to do comics in the digital age now, it’s a different world. What I’m interested in is keeping the organic ‘brushiness’ of paper but getting a bit more of the digital stuff happening in the art. I see the influence of digital in art similar to electronic in music, like how bands such as the Eurythmics let the electronica be the sound. I’m interested in what the computer does digitally; and putting it on the page as well.“
Below we can see the development of Brendan’s Walking Dredd initial idea and sketches… 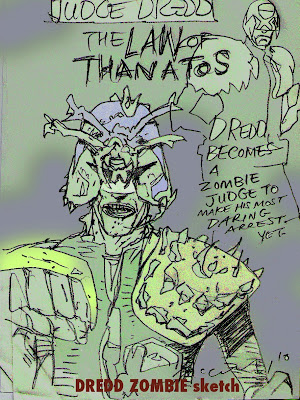 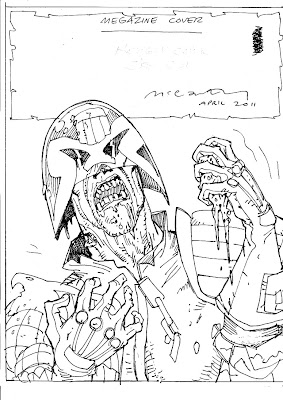 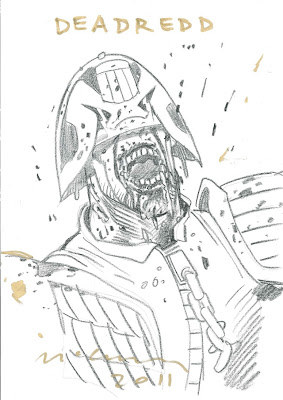 Including this great mouth study, yuck! 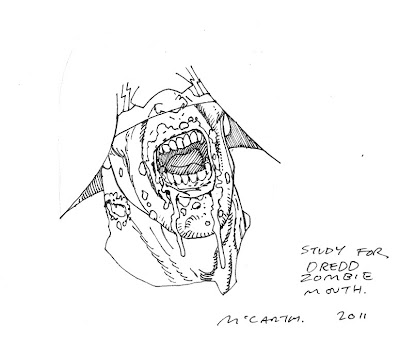 Here are the colours… 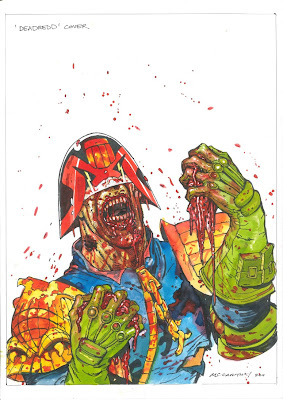 Before the image is treated to some ‘Digidelica’…

When discussing his digital colouring, Brendan elaborated on his new-found style further “Artistically, I’ve saturated the colours and dropped in massively over-saturated backgrounds to allow the computer to produce the visuals. In the same way that an electronic musical artist will allow the synthetic electronic sound to ‘let it be.’“ 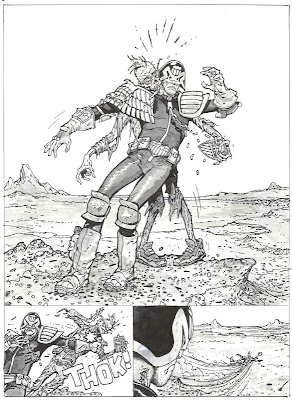 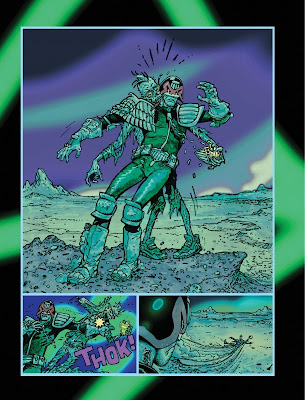 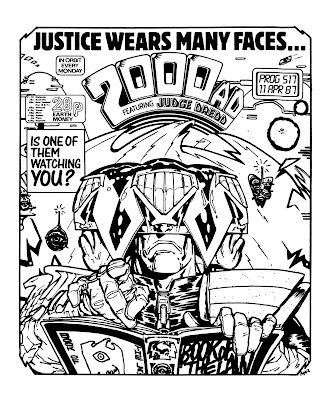 Thank you SO much to Brendan for getting in touch! Receiving an email from him today was a real WOW moment, certainly a highlight since I started this blog. You can see more of the genius’ work at the excellent Strangeness of Brendan McCarthy site here.
I’ll leave the final word to Brendan who says “Zaucer ye not, madam!“