I was struck by the way Grantland’s Rafe Bartolomew expressed his disbelief at the recent split decision that gave Timothy Bradley Jr. the WBO welterweight title belt over Manny Pacquiao. He called it ‘boxing’s worst robbery at a major fight’ since the Pernell Whittaker-Julio Cesar Chavez ‘draw’ in 1993. That unusual ‘majority draw’ (two judges called it even, the third gave the fight to Sweet Pea, who doesn’t then get a 1-0-2 split decision) was indeed unusual, but it wasn’t even the worse decision of Whittaker’s career. That one came on another split decision five years earlier. I remember it well because it happened on my birthday, and I was there in the ring.
It was March 12, 1988, in a dingy arena in the Paris suburb of Levallois-Perret, and Whitaker, whose pro record stood at 15-0, was fighting Jose Luis Ramirez, like Chavez a Mexican, for the World Boxing Council lightweight title which Ramirez had won after Hector ‘Macho’ Camacho had vacated it. I was there working for ABC Sports and we were broadcasting the fight back to America. It wasn’t the most relaxing birthday—dealing with boxing promoters was never easy and the French brothers who were promoting this fight were particularly slippery whenever we had issues to iron out. Simply getting the crew out to the arena from the hotel in central Paris was a task: traffic on the Periphrique ring-road around Paris tied them up, while I had used the metro to make sure I was there early. But you didn’t suggest to ABC Sports producers that they travel by subway.
The fight was totally one-sided. Whitaker dominated early, then appeared to settle into counter-punching, because, as we learned later, he had broken his hand in round four. 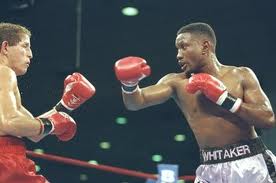 But although Ramirez continued to come forward throughout the 12 rounds, he rarely landed any punches of consequences, while Whitaker picked his shots and connected. I had Pea up 8 rounds to 4 when the bell sounded.
What happened next was different. After the bell, I got into the ring; my job would be to get the interview for our announcer Don Chevrier. I went over to the ropes, above where the judges’ scorecards were being totalled, and began reading them upside down. I looked up with an expression of disbelief as I realised Whitaker was behind on two cards, and caught the eye of Jose Sulaiman, the Mexican boss of the WBC, who looked at me impassively.
Then I turned to Whitaker’s corner and looked at Lou Duva, his manager, from whose Main Events company ABC had acquired the fight. Lou was built like a white-haired fire hydrant; his face that looked like it had battered all the other fire hydrants into submission. Lou was a former boxer who’d used the profits from a trucking business to open his own gym, which grew into Main Events when they started managing Leon Spinks. Lou didn’t waste much time with bullshit, and when I shook my head at him he knew what was going on. He climbed into the ring, and even before the announcement was made, he was yelling over the ropes at Sulemain. Then the splitdecision came, with the English judge Harry Gibbs (a referee back in London) scoring it 117-113 for Whitaker, judge Newton Campos 118-113 for Ramirez, and judge Louis Michel 116-115, also for Ramirez.
I’d seen bad decisions before. Some I assumed had been foregone conclusions. Part of my job as Director of Programming in Europe involved sometimes going to matches in London, to watch fighters whom British promoters might be touting. Sometimes I went out of my curiosity. But there were many times these young fighters would be facing some older tomato-can, flown in from a great distance, usually Latin America, for the express purpose of getting beaten. And if the can were to outbox the hometown hero, well, he would inevitably lose a decision, rendered by the referee alone (who was sometimes that same Harry Gibbs), by a scant half-point, and have his arm raised afterwards for applause as a ‘gallant loser’. In Ireland I had a promoter offer to ‘speed up’ the two remaining fights on the card before the one we were doing live back to the States; there aren’t too many legit ways you can speed up a six-round fight. The nature of the business, however, means you shrug it off, and wait for the moments of courage and high drama the fighters themselves provide.

Lou Duva wasn’t shrugging anything off. 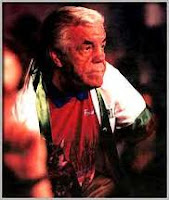 His face turned bright red and he exploded, leaning over the ropes to direct a chain of profane accusations in Sulaiman’s direction. He invited him to perform anatomical impossibilities, suggested embarrassing things about his geneology, and, more to the point, threatened to sue the WBC. Meanwhile Don was setting up inside the ring, and our producers were telling me they wanted Lou for the interview. I reached around him, telling him we were ready to talk to him,and half-dragged, half escorted him over to Don, with him leaning backwards as he continued to hurl invective at Sulaiman. Then he turned and faced Don, who suggested he might be upset by the decision. Lou turned to the camera and proceeded to give a calm, reasoned evaluation of where he thought the decision was lacking, and what redress might be open to him and Whitaker, and what avenues they might explore when they got back to America. Don thanked him and Lou immediately spun around, picking up his verbal assault on Sulaiman as if from mid-sentence.

I spent the rest of my birthday commiserating in a hotel bar with various people from Main Event, ABC, and some press. The famed British boxing writer Harry Mullan would later write that the decision ‘was generally considered to be a disgrace’. Our opinions that night were more Lou Duvaesque. I would have my real birthday the next day, a Sunday lunch with friends at La Ferme Ste. Genevieve, where in those days they did old-fashioned escargots and confit du canard. When I told them about the robbery I’d witnessed the night before they just laughed, surprised I could take it so seriously. ‘You haven’t been at ringside and seen what goes through those guys’ eyes,’ I replied. ‘They deserve better’.
Pernell Whitaker went on immediately to win the IBF lightweight title from Greg Haugen, and then avenge himself over Ramirez with a unanimous decision in Norfolk, Virginia that gave him the WBC belt as well. He won seventeen fights in a row between that loss to Ramirez and the excruciating draw with Chavez, and won titles at Welter and Light-Middle before finally suffering his first ‘real’ loss to Oscar DeLaHoya. How seriously should we take it? The Book Of Boxing Lists has the Chavez fight as the tenth most controversial of all-time, and the Ramirez as the ninth. That’s pretty tough for just one fighter. Take away those two bent decisions, and Whitaker gets recognised more widely as one of the greatest fighters of his era, maybe of all time.