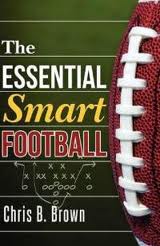 s Brown’s Smart Football columns are essential reading for analysis of modern football’s Xs and Os, and The Essential Smart Football is more of the same. I enjoyed this collection in book form, indeed have re-read some it already, but I also found the whole of these pieces less effective than the sum of their internet parts.

This is for two reasons, one of them unavoidable and the other not. The first, and unavoidable one, is that when Brown posts on the internet, there is usually, in addition to diagramming, video clips which he uses to illustrate the concepts, schemes, or plays he is explaining. He links to brilliant video of coaching sessions, where things are explained in the kind of context I’ve only got when I had really good access with a couple of coaches in NFL Europe. It’s that depth of reference detail that makes his work so informative and enjoyable. In the book format, much of that is lost, which, as I say is unavoidable. It does not diminish the impact of anything Brown has written here, it just means there’s more explanation left unsaid.
The second reason is that this is very much a collection of individual pieces, yet there is a themed book screaming to be let out by some perceptive editor. The theme is the continual evolving nature of offensive and defensive football, and the way that changes in college offense are impacting the NFL in ways that not long ago were thought impossible. Spread offenses couldn’t work in the NFL, so the argument went, because the players were that much bigger, faster, and better, they were better-prepared by professional coaches. Schemes that existed to bridge the perpetual talent gap in college (and at lower levels), to allow less-gifted athletic teams to compete with the more physically talented, just wouldn’t work at the next level.
Well, as we have seen, that concept is being proven wrong. Brown details many of the ways in which it is, and strips down many of the college concepts which already are becoming keys to the NFL game too. I love the way Brown

jumps from Urban Meyer’s spread offense to the 3-3-5 defense to Mike Leach (via his book Swing Your Sword). But there are further sections on Frank Beamer or Nick Saban, for example, that would continue that back and forth argument, as well as a few on offense as well. Brown is brilliant on the largely unacknowledged influence of Steve Spurrier, and tracks the history of Dick LeBeau’s zone blitz and the Alex Gibbs school of run-blocking in an almost off-hand way (the former in a fine dissection of the Packers-Steelers Super Bowl. He’s very good at getting from the specific (or practical) to the theoretical, as in his pre-Super Bowl piece on Victor Cruz and the Giants’ relation to the spread offense.
But all this wonderful analysis would have had more impact had it been analysed to a point, and I can almost see why not. Because there are three pieces here about the Patriots: one on how Rex Ryan created the new Pats’ offense, which makes perfect sense from the moment you read the title, one on Brady and the no-huddle, and one on the one-gap and two-gap defense, which pointed out something I had not noticed about the New England defense last season: not only were they shifting looks, they were often playing half the field in a one-gap, 4-man front, and the other in a two-gap 3-front. I went back and looked and Brown, of course, was right.
New England has been a crucible of experimentation in the Belichick era; he famously has sought ought Urban Meyer, Nick Saban and others in a conscious effort to translate their concepts into the NFL game. His O line operates closer to Alex Gibbs style than many would notice, and his defenses owe much to the zone-blitz. I wonder if, had Brown organised this book along the themes I’ve suggested, if it wouldn’t wind up funnelling down in the end to an analysis of the Pats as the team that most brings this evolution of the NFL game to the forefront? I don’t suggest for a moment that it did, and if it did, it might well limit the book’s appeal—but I do think that judicious editing, with the elements re-ordered and connected by Brown’s macro-analysis, would have made this a classic, instead of just essential reading.