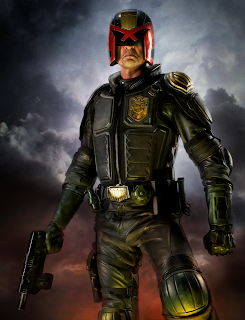 “Yeah…”
By now most UK readers will have seen (at least once) the absolutely brilliant Dredd movie, if not, go out and see it right now! To the overseas readers, PLEASE go and see it as soon as you can, I promise you’ll love it!
The pressure must have been intense for Chief Design-Bot Pye-01 when he was responsible for the cover of the Prog on the film’s release in the UK. Thankfully (and rather predictably) he didn’t disappoint, turning this photo cover into a visual treat!
Here’s Pye to tell us more “The first thing I did was work out where I wanted Dredd on the page and how big, using one of the approved promo photos we’d been supplied by Lionsgate. Tharg’s original idea was to have him on a plain white background, so I did a very rough mockup of the cover layout complete with text and everything to see how it’d look. I thought although it was striking, you focused so much on the shape of his silhouette you didn’t notice all the cool detail on his uniform, so I tried a black version too (which is what I thought would look coolest), but that had almost the oppsite effect – The only thing to look at was all the cool detail, but from a distance there’s nothing to draw your eye. That’s when we settled on gray, which took the best elements of the previous 2. I dunno why it took so long for me to try gray really as that’s the background colour already!“

Fifty (minus forty seven) Shades of Grey
He continues “The next job was to clone out all the stitching and crap from the background of the photo. I was going to have him on a very flat tone but it was pretty obvious quite quickly that vignetting him would look much better so I did that instead…“ 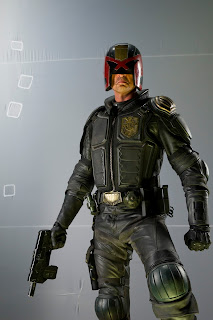 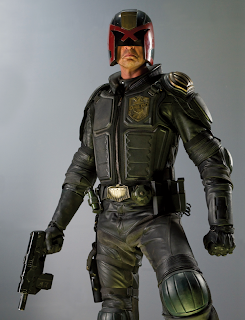 and after!
In general, photo covers and photo strips have been unpopular with the readership. Pye explains “One of the problems of photos over the usual comic illustration is that they’re just not as striking, the blacks can look grey and the colours are always much more muted, so I tried to sort that out a bit in Photoshop. Using a combination of multiplied, screened and overlayed layers I darkened the blacks, added tone and highlights into places there wasn’t before and deliberately ramped up the coloured parts of his uniform. The helmet stripe is redder, the gloves greener, and the gold bits more yellow. I really like what they’ve done with Dredd’s uniform in the movie, but I reckoned as this was going on the front of the Prog I’d make the effort to bring him closer to the comic colour-wise than I would have done otherwise.“ 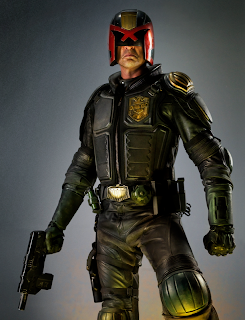 “The clouds where a last minute addition, and it seemed quite a natural thing to add in based on the colours I had in background already. I never (consciously) meant to ape the film poster but that’s kind of what it ended up doing (no bad thing). The clouds are from a texture bank we have at work for use on the games side of things, and there’s about 3 different skies in there all merged in and out of each other…” “Ssssssss, you cannot kill what does not live!”

“I was quite pleased with the break in the clouds framing Dredd – it adds a bit more focus to a single area of the picture, really drawing your eye up to his head.“

“Negotiation’s Over!” The finished image.

But not only was Pye responsible for the image, as designer the text is his job too; “Final thing! I adjusted the type layout slightly from my mockup, but kept the fonts the same – this time deliberately copying the movie posters’ design. Kind of gutted I had to cover up that cool orangey yellow highlight on his kneepad with the barcode, as that was my favourite bit of the picture! Bloody barcodes are always a pain in the arse!” 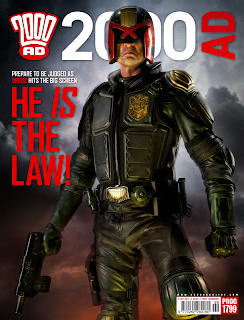 Bloody Barcode!
In case anyone needed a reminder of the movie poster, here it is below… 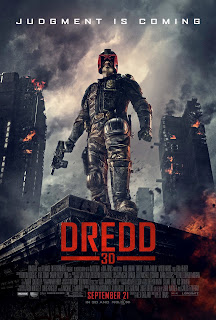 Many, many, many thanks to Pye for his fascinating commentary and for sending the images, especially as he had just returned from a holiday and probably had a mountain of a backlog to clear. PLEASE check out Simon’s blog here, it’s fantastic!

A quick search in Google will take you to a few more of those Dredd promo pics. Check out the face shot below… 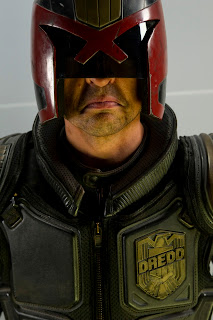 Stop sulking, Joe, you can go on your bike after tea!
And this cool behind the scenes Lawmaster shot. 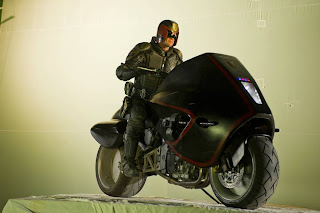 Courtesy of Steve Cook’s brilliant Secret Oranges Blog, here’s a blast from the past from those pictorials of 1993 with this great Dredd uniform which is obviously based on Cliff Robinson’s depiction of Dredd… 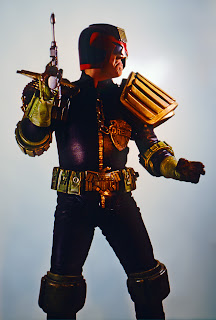 And finally, from the eagerly awaited Judge Minty fan film, the prog’s very own Greg Staples as Dredd himself! Cool! 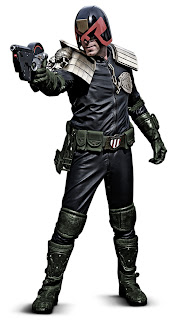 Dredd in the Grattan Catalogue