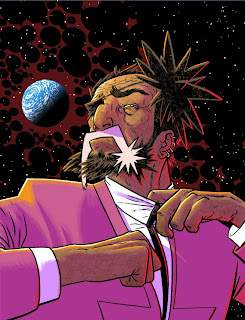 Double 2000AD Cover of the Year winner D’Israeli is back, with a cover that manages to be both stirring and hilarious!
Yes, everyone’s favourite Wally Squad judge Dirty Frank is back in Low Life: Saudade. In case you’re wondering about the title, Saudade is a Portuguese word meaning a deep longing for a lost love. As we can see, Frank is on the moon, so who, or what, is he pining for? Aimee Nixon? The Low Life? His beloved teddy? Can’t wait for this one!
As ever, Matt has been incredibly generous with his time, sending pages and pages of meticulous notes as well as, get this, twenty images to show how he has crafted his latest masterpiece!
So, over to Mr Brooker, it’s going to be a long, but fascinating journey!
“The Brief: “Something moon-based? Or Frank in suit and tie?”

“Below are different first-stage roughs submitted to Matt Smith, playing round with the ideas; all these are done in Manga Studio EX4, using the Pencil Tool for both drawing and colour. NOTE: Everything here is done in software, drawn with a Wacom tablet. I use terms like “pencilling” and “inking” to describe the stages (and you could repeat most of them on paper) but no graphite or ink was used in the making of this cover!”

“Image one shows Frank naked and bewildered on Luna-1, with the shadow of Mister Overdrive falling across him…” 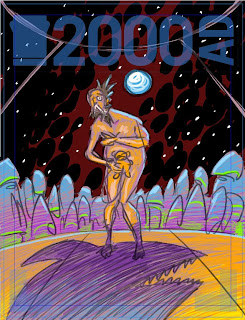 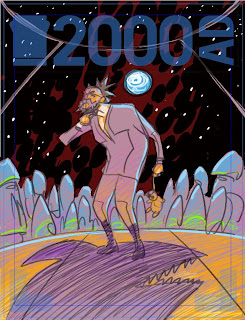 “And finally Frank struggling against the suit he’s wearing with stars/Earth in the background.“ 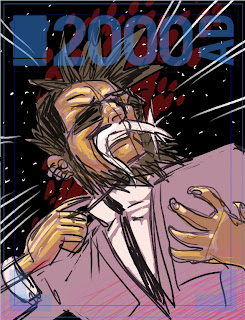 “Matt liked the close up of Frank, but asked for  a pose that was more mock-heroic (parodying “The Right Stuff” and that sort of thing.)“ 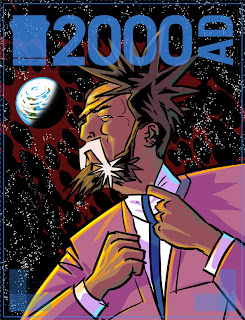 “Looking at it again, I’m not sure if Frank’s pose is beefy enough, so I do a quick sketch for a revised pose and send it in. Matt Smith is fine with the changes.“ 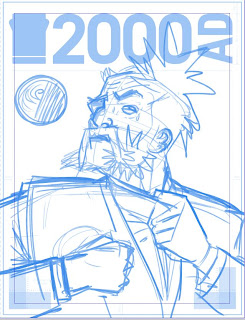 With the concept approved (I mist say, I’d have LOVE to have seen the naked Frank cover) work begins. As ever, Matt is quick to use Manga Studio’s perspective feature. “Add perspective lines using Manga Studio’s Perspective Rulers function. This is key to getting the angles of Frank’s face right.“ 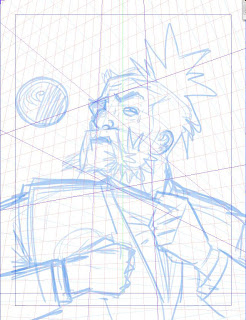 “Even someone as messy as Frank needs to be drawn in perspective.“

“1st-stage pencils; I get the features of Frank’s face lined up with the grid to make him look more dramatic and three-dimensional. Not sure about the hands, though.“ 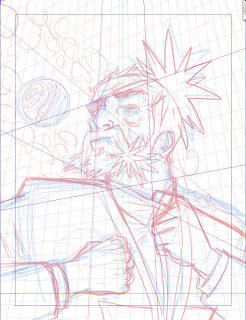 Ever the perfectionist, Matt deals the the hands. “I decide to take some reference shots to get the angles on the hands right. I use a digital camera with a flip-out screen so I can pose for the shots and see what I’m getting. Since I’ll be using these shots on screen only, I shoot at the lowest resolution the camera can manage. I do each hand separately, partly for more control during compositing and partly because I need a hand free for the remote trigger!“

“In the very unlikely event of D’Israeli needing extra work, he can always be an underarm deodorant model…“

“I import the shots from the camera into Photoshop, boost contrast and scale them down to about 640×480 pixels, save them as JPEGs, then import them into Manga Studio. I can freely move and scale the images during import to get them exactly where I want, at the size I want. I pencil in new sleeves (in brighter red) but I don’t bother pencilling over the photos as it’s just as easy to trace them at the inking stage.“ 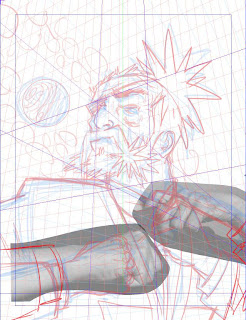 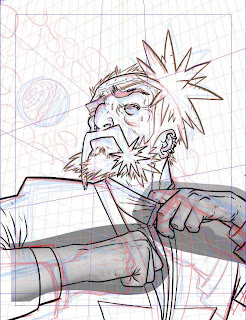 “Now all is well with Frank’s hands…“

“Inks on their own – the brown inks and the black inks are on different layers for greater control.“ 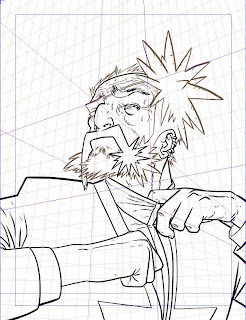 “Make a note of those brown bits, there’s a handy tip coming later on…“

“Inks plus solid blacks (again on a separate layer).“ 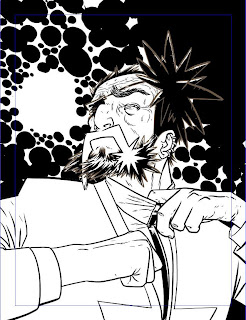 D’Israeli tells us why he prefers to do his flatting in Manga Studio. “Flat colours – Manga Studio’s colouring tools are a little primitive compared to Photoshop or Painter, but Manga Studio’s Paint Bucket Tool is beyond compare – its “Close Gap” option enables it to ignore small gaps in line work, making accurate colour fills incomparably quicker and easier than with any other program. With some complex pieces that use subtle colour combinations, you need to do the “flats” in false colours so you’ll be able to select all the different areas easily. In this case, there are only a few areas, and on the whole the true colours are distinct enough to be used from the get-go. The exception is Frank’s suit, where I want to be able to select the chest and arms separately, so I use a different pink for the chest. I’ll change that in the final colouring. As ever, the colours go on their own layer, this time under the ink drawing.“ 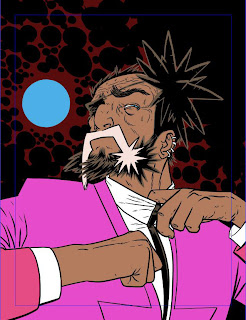 “Because the colours are on their own layer, I can hide them to concentrate on drawing the shadows (again, on a new layer). I draw them using the Lasso Tool to make selections, and a keyboard shortcut to fill the selections with colour. Note that the shadows are completely hard-edged; I’ll add soft edges as required later on.“ 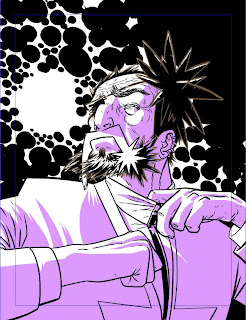 “The shadows – blimey, Hank Marvin has let himself go…“

“Switch off the shadows, new layer; this time I draw what I call the “Grot Mask;” these are the areas (Frank’s skin) where I’ll add a grime texture. There’s much less of this than usual because Frank’s suit is meant to be new and clean.“ 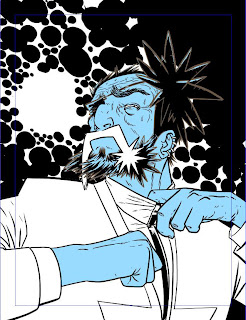 “Grot Pot – You can learn more about D’Israeli’s Grotty textures and even
download a few here.“ 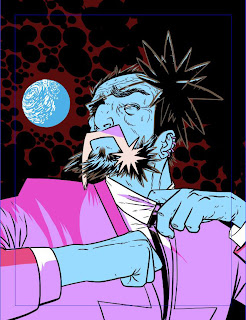 “It is very cold in space!“

“I open the file in Photoshop and scale it down to 400dpi using the Image size… command with “Resample Image” set to “Nearest Neighbour (Hard Edges)” This means all the patches of flat colour will have hard edges (no softening “anti-aliasing”), making them easy to select for shading and the like. Manga Studio uses a default resolution of 600dpi, and exports most cleanly at that resolution, but 600dpi colour files are HUGE, so I save memory by scaling them to 400dpi, which will look nice and sharp in print.”


“I add a black shadow to on the Earth using the Grad Tool; then the layer containing the purple shadows is set to a blend mode of “Multiply” which makes the underlying colours show through, as if it were a wash of watercolour or coloured ink. I use the Brush Tool to soften up some of the shadow edges.“ 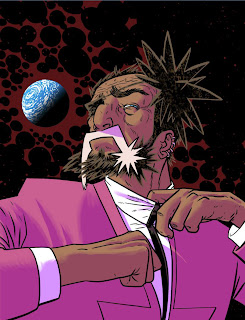 “The cover begins to take shape…“

“New Layer; add highlights, first hard-edged ones using the Pencil Tool, then softened a little with the Brush Tool.“ 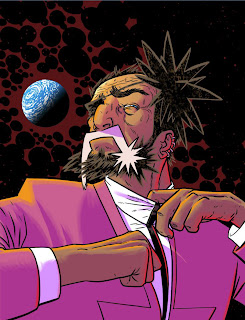 “Remember those brown inks on Frank’s hair, the ones I made sure were on their own layer? Pick that layer, click “Lock Transparency” in the Layers Palette, and I can now paint into those outlines without anything else being touched. Like using a selection, with none of the faff of making one. Quick way to do rimlight on the hair…“ 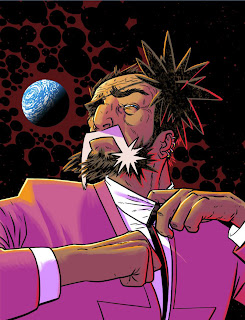 “Ah, so that’s what the brown inks were for…“

““Lock Transparency” again; this time I show the blue “Grot Mask,” hit “Lock Transparency” again, then fill with white (Just use Edit:Fill, the colour can’t go anywhere I don’t want it to). Now set the layer’s Blend Mode to Multiply, and that white becomes transparent like glass; invisible. But it’s there, and it’s still locked, so if I dab a Brush Tool (that uses a captured sponge texture) loaded with brown over Frank’s face and hands, the texture will only appear where my “Grot Mask” is. (I make sure the “Grot Mask” layer is below the layers containing the highlights, so they’ll show strongly over the top; I think of Frank as greasy-grimy, so he’d be fairly shiny.)“

“Bring on the Grot!“

“And that’s your lot; save a copy (with layers flattened) to TIFF format, FTP it to 2000AD, email an invoice!“

Invoice? I thought Tharg’s droids worked for oil and a decrease in torture from Mek Quake. I’m sure that must have been a typo. Below is the cover with the logo and other gubbins on it. I love how the logo uses D’Israeli’s beautiful orange to purple gradient, s’beautiful! 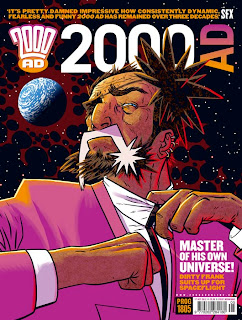 Thank you SO MUCH to Matt for sending such an amazing, and extremely useful, breakdown. Again he has produced an outstanding cover and it’s almost like we were there when he did it!