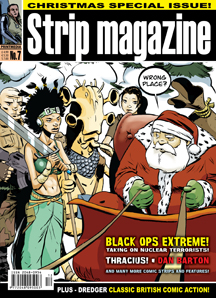 After innumerable delays STRIP #5/6 is finally on its way to the shops and to subscribers.

“It’s a case of if anything could go wrong, it did,” explained Mike Conroy, head of Print Media Productions UK operation. “I’m not going to attempt to justify the title’s lengthy absence but I would like to apologise to readers – especially to subscribers – for the inexcusable delays, which they have accepted with great equanimity.”

As for the future, STRIP #7 is going to be an 84-page issue carrying a £4.99 cover price. The Christmas special [see cover, left] is to feature Citadel, a never-before-printed-in-English story by the late, great French comics master, Moebius. A six-pager, it will sit alongside a variety of other standalone stories, among them a classic Hook Jaw episode from the controversial 1970s British comic, Action.

PMP is then putting STRIP on deliberate hiatus but only until February, when the comics anthology is to be relaunched as a newsstand title.

“We will be using this time to continue to resolve many of the problems we have encountered. One of our top priorities will be secure a UK shipping company which will be able to deliver STRIP efficiently and on time,” stated STRIP publisher Ivo Milicevic. “You wouldn’t believe what sort of problems we have had with carriers… one entire print run is still wandering somewhere in Italy while our latest shipment only got through on the second attempt… no one knows where or how the original vanished!

“I am amazed and grateful just how supportive our audience has been. I can promise that the relaunched STRIP – The Comic Magazine will bring more really great art and stories to he newsstands. It will be worth to wait,” he proclaimed.

STRIP #7 is currently in production and set to hit shops in the first week of December.