As Dean Burnett says in the Guardian today:

every year, much of the media become fixated on a specific day – the third Monday in January – as the most depressing of the year. It has become known as Blue Monday.

This silly claim comes from a ludicrous equation that calculates “debt”, “motivation”, “weather”, “need to take action” and other arbitrary variables that are impossible to quantify and largely incompatible.

Its creator, Dr Cliff Arnall, devised it for a travel firm. He has since admitted that it is meaningless (without actually saying it’s wrong).

It has been suggested that the concept of ‘Blue Monday’ was based on junk science drummed up by a travel company as a clever ploy to have us booking holidays to sunnier climes.

But this comes halfway through the article – after many sentences which clearly suggest Blue Monday is a genuine thing. The spur this year appears to be a press release from Anglian Home Improvements, which may just have an ulterior motive for suggesting natural light and windows can improve a person’s mood.

The headline on today’s article is:

However, the sheer emptiness of Blue Monday – and the laziness of the ‘journalism’ – is revealed by this: 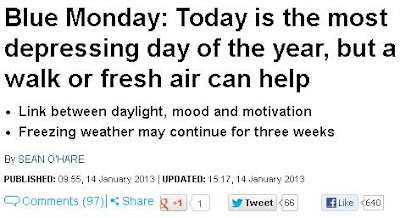 Yes, that’s the ‘today is Blue Monday’ article, based on the same press release, but written by Sean O’Hare, that the Mail published last week.

it comes as little surprise that today is said by experts to be the most depressing day of the year.

Ben Goldacre’s excellent article – from 2006 – on the background to Blue Monday is worth reading.