WARNING: THESE SPOILERS MAY CONTAIN SPOILERS

To minimise spoilificatiousness, I’ve left these nearly a week from delivery of subscription copies. Since subscribers will already have part 2 by the time I post this, It’s time to get going.
Page 1 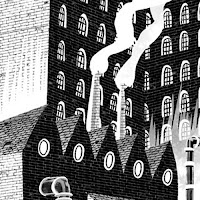 Based loosely on the landscape of Bradford in my native Yorkshire. 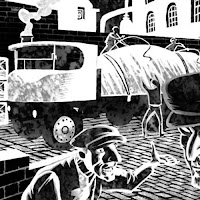 The sentinel was a real steam powered lorry produced by the Sentinel Waggon Works from 1906 till as late as 1950.
Page 5 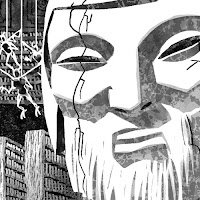 The severed head of the giant ambulatory statue Talos and several stuffed harpies from the 1963 Charles Schneer-Ray Harryhausen film Jason and the Argonauts. 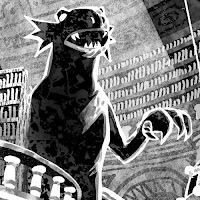 The “British Godzilla,” from the 1961 film of the same name. Gorgo was the second of three monster films directed by Eugène Lourié. The first, The Beast from 20,000 Fathoms, kickstarted the career of animator and effects wizard Ray Harryhausen, as well as inadvertantly spawning the whole Japanese Kaiju genre when Toho made Godzilla (Gojira) in 1954 to cash in on the terrific success of The Beast in Japan. Ironically, Lourié ended up adapting the Kaiju “rubber-suit-mation” technique to create the monsters in Gorgo. His third monster film, The Giant Behemoth, brought him together with veteran effects animator Willis O’Brien, the man behind Hollywood classic King Kong, and mentor to the young Ray Harryhausen.
Gorgo enjoyed considerably longer life in comics than in movies, enjoying a 23-issue run in his own title published by Charlton Comics. The comic featured early work by Steve Ditko. 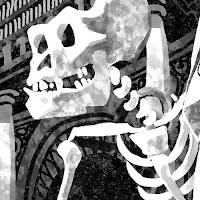 The “British King Kong,” from the 195(?) film Konga, about a gorilla who accidentally drinks super growth serum and ends up ambling amiably around London while sqauds of hysterical Tommies shoot at him for being out of scale (still a capital offence in the 1960’s). Konga is also notable as the film in which veteran British actor Michael Gough (later to play Alfred the butler in the Tim Burton Batman movies) succeeded in the delivering the line, “if I hadn’t shot her, pussy would have started to swell uncontrollably,” with a straight face. Charlton Comics adaptation of Konga is notable as the first published professional work of Steve Ditko, who went on to co-create The Amazing Spiderman. 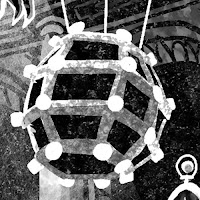 From left to right, on the balcony rail: 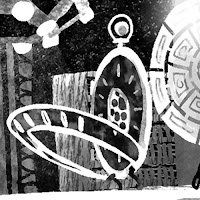 HG Sewell’s pocket-watch shaped time machine from Ian Edginton’s and my Tempus Fugitive stories in Judge Dredd (2004-2007). Sewell himself has made brief cameos in Stickleback as an inmate of Bedlam. 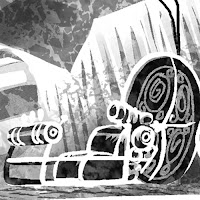 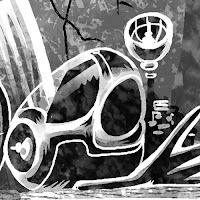 The time machine ridden by Malcom McDowell as HG Wells in pursuit of Jack the Ripper in the Nicholas Meyer’s 1979 film Time After Time. 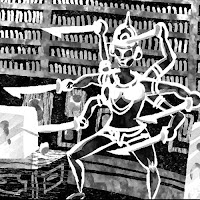 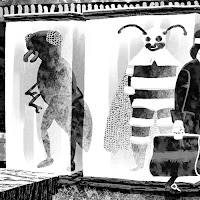 An ant-like Zarbi and moth-like Menoptera from the Willam Hartnell-era Doctor Who story, The Web Planet (1965) 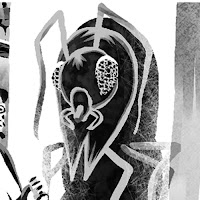 An adult Wirrn from the Tom Baker-era Doctor Who story, The Ark in Space (1974). Not shown here, Wirrn larvae were huge featureless maggot things made by wrapping an unfortunate BBC extra from head to foot in bubble wrap. 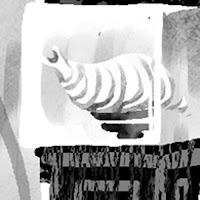 A giant maggot from the John Pertwee-era Doctor Who story The Green Death (1973). 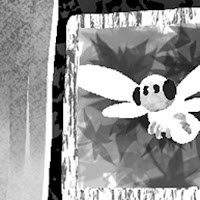 (Shown in framed photograph) Mosura (Mothra), the giant moth guardian of Infant Island, from the Toho film of the same name (1961). The most popular Kaiju after Godzilla, Mothra was the first Toho monster to cross over with the Big G in Godzilla vs. Mothra (1964). She appeared in 14 Godzilla fims in all three series, and is the only Toho monster to spin back off into a solo series (The Rebirth of Mothra, 3 films 1997-9). Although, in the original film Mosura, the meddling Western power is coyly renamed “Rosilica,” the film still exhibits an rather startlingly overt anti-Amercianism, making it one of the more interesting ones of its type. 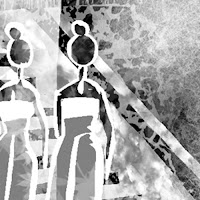 The two tiny figures in the glass case panel left are the telepathic twins who mediate intercede with Mothra on behalf of the world, variously called “The Fairies” or “The Cosmos” in different versions. In the earlier films, they were played by twin sisters Emi and Yumi Ito, who performed on stage as “The Peanuts.” The jar of peanuts on the case above them is a reference to this. 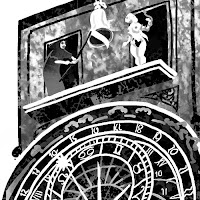 The timer for Stickleback’s regeneration machinery is a copy of the famous multi-faced astronomical clock that stands in the old town square in Prague. It’s the third oldest astronomical clock in the world, and the oldest still working. 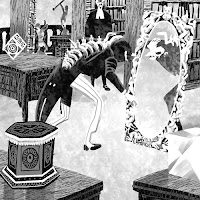 Panel 2: Surrounding Stickleback in this panel are; a Lament Configuration box from Clive Barker’s Hellraiser; the box, the musical box (wound up and ready to play) from the opening titles of 1960’s childrens’s stop-motion puppet series Camberwick Green; Malvoisin’s Mirror, from the strip of the same name written by Chris Lowder and drawn by the excellent Brian Lewis for House of Hammer #6; and on the bottom right, the fully assembled Key to Time from Doctor Who season 16 (1978-9).

On re-reading the script for this post, I discover I was also supposed to put in the Maltese Falcon, but I forgot. Oopsie. 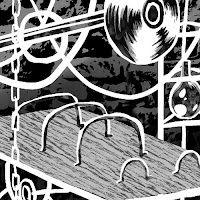 Panel 6: Frankenstein’s Apparatus
The equipment shown in flashback behind Orlando Doyle is all apparatus from Frankenstein’s laboratory in the classic 1931 James Whale/Boris Karloff version. Designed by Kenneth Strickfaden, this gear was still showing up in horror films as late as the 1970’s. 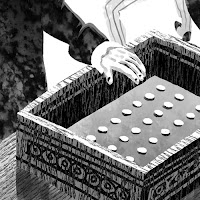 Previously mentioned in Stickleback: England’s Glory, Judas Iscariot’s 30 pieces of silver have been paid by Stickleback to Orlando Doyle in return for future favours. Stickleback’s resurrection clears the debt. 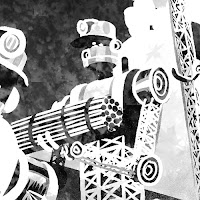 The skeletal construction robots with their scaffolding-like limbs are a tip of the hat to Kev O’Neill’s classic Trebuchet robot from Nemesis the Warlock Book III. 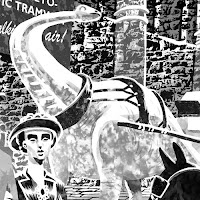 Dray Brontosaurus
Stickleback is set in an unspecified late-Victorian era, so there’s none of this Apatosaurus business yet. We’ll find out why there are dinosaurs in the streets of London next Prog. A reference to the controversy surrounding the theory of natural selection proposed by Alfred Russel Wallace and Charles Darwin (who appears on the pub sign, lampooned as an ape.) 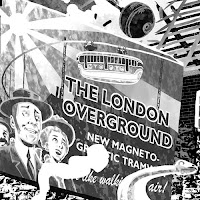 The London Overground
The notion of the overhead monorail as a symbol of futurity goes back many years; real examples have been built, most famously in the Disneyland and Disney World amusement parks in the US. The overhead design here is loosely based on the Wuppertal Schwebebahn, opened in Germany in 1901 and still in service, though I’ve simplified the overhead support considerably. The name London Overground is a recycling from Ian Edginton’s and my graphic novel Scarlet Traces (Judge Dredd Megazine 2002-3/Dark Horse 2003) 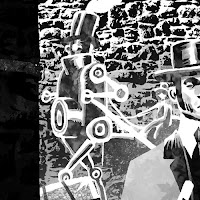 The Steam Man of the Prairies
Written by Edward Ellis in 1868, The Steam Man of the Prairies is considered the first US science-fiction “dime novel.” It’s the story of Johnny Brainerd, a teenage dwarf who build a non-sentient steam-powered automaton capable of pulling a carriage at speed. Despite the somewhat bizarre premise, the story was enormously popular, seeing reprint 6 times between 1868 and 1904, and spawning many imitators, including the long running Frank Reade boys’ adventure series. It’s one of the earliest examples of the invention-based genre known as the “Edisonade.” 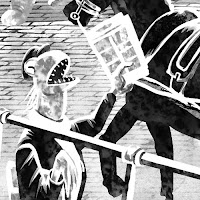 These evolved dinosaurs were inspired by Professor Dale Russel’s famous (and controversial) dinosauroid thought experiment – an attempt to map where dinosaur evolution would have led if they had not become extinct. His own proposal was for a strongly anthropomorphic intelligent dinosaur, though our version follows later thinking that posits creatures that are more theropod-like. Just why the streets of London are alive with these little critters will be revealed next Prog, so I’ll say no more.