One of the Carlson family’s favourite stock stories involved our first-ever ‘vacation’, in 1962, when the we went on a trek through Washington DC; Williamsburg Virginia; Bristol, Tennessee; and up the Shenandoah Valley to Amish country and Gettysburg. We learned a lot on that trip; at the Washington Monument in the nation’s capital my brother got sick, and when we went to the facilities, they were segregated. We were in the ‘whites only’ restroom and I asked my father if that was right, and he said ‘no, that’s wrong, but that’s what people here do’, and another man at the sink shot him the glare, which bounced off.
But what happened at Gettysburg my mother never forgot and always told me and anyone else who would listen. This was during the Civil War centennial, of course, but Gettysburg was nowhere near as developed as it today—development that has taken place in the context of great resistance from locals and historians. I was, at age 11, already keen on the Civil War. Anyway, we were standing on Cemetery Ridge I started to explain what we would have been seeing on the day, and how the troops moved, and by the time I finished we had attracted a small crowd of people, who then proceeded to follow us to the next few points of interest, which I happily explained as if I were a guide.

I mention this because it is the sesquicentennial anniversary today of Lincoln’s Gettysburg Address, originally delivered at the dedication of the cemetery at the battlefield. In honour of the event, I stopped to read Pickett’s Charge, George R. Stewart’s ‘microhistory of the final attack at Gettysburg’, originally published in 1959, on the cusp of the centennial. Stewart is a fine writer much overlooked today, best-remembered for Names On The Land, his study of American place names, but also the author of Ordeal By Hunger, about the Donner Party.

Pickett’s Charge, something of a misnomer because General George Pickett did not actually charge with his command, signifies what is recalled as the ‘high-water mark’ of the Confederacy. Faulkner wrote famously in Intruder In The Dust of the way that ‘For every Southern boy fourteen years old, not once but whenever he wants it, there is the instant when it’s still not yet two o’clock on that July afternoon in 1863, the brigades are in position behind the rail fence, the guns are laid and ready in the woods and the furled flags are already loosened to break out.’ By the end of the afternoon, Robert E Lee’s Army of Northern Virginia will have, for the first time, been defeated; the next day, Vicksburg would fall to Ulysses Grant. But for a few hundred thousand more bodies, the Civil War was over.

It is the ultimate myth of failed glory—and at Pickett’s charge, as with each of the Confederate set-backs during the Gettysburg battle, they came close to triumphing. They were not defeated, this once, by superior numbers, nor was the Union position on a big hill or entrenched, but it was nonetheless a suicide mission across bad ground which James Longstreet, Lee’s second-in-command, did not want to undertake, and did his best to avoid. For that, he would eventually become one of the scapegoats in Southern history. It might also be seen as the beginning of the end for Napoleonic warfare, though European generals would not get the message until after the Great War.
Stewart, by assiduously reporting facts as best they can be ascertained, without any obvious agenda, recreates the battle in detail both comprehensive and comprehensible. The true heroes arise naturally from the narrative: those forgotten, like Capt. Frank Haskell, who single-handedly rallied the 71st and 72nd Pennsylvania to counterattack at ‘The Angle’, the center of the Union Line; he deserves a film like Josiah Chamberlain of Maine, who saved the Union lines the previous day at Little Round Top. But the stories that resonate are those of the leaders. Notably Winfield Scott Hancock, arguably the best field commander the Union had, who had taken over from John Reynolds, killed on the first day of the battle. Hancock remained mounted throughout the massive artillery bombardment preceeding the charge; when wounded during the fighting he refused to quit the field until the battle was won. Hancock was a leader; he would run for president, as a Democrat, in 1880, but lost to James Garfield by only 10,000 votes.
The leader of the rebels who got the farthest was Lewis Armistead, Hancock’s close friend (he’s played brilliant by Richard Jordan in his final role, in the film Gettysburg). Armistead, commanding one of Pickett’s divisions on foot, stuck his sword through his hat and led his men waving it for all to see; he was killed crossing The Angle, and his dying words, as reported by the Union surgeon who answered his call as a fellow Mason,

and treated him on the battlefield, became, as Stewart says, ‘a storm-centre of controversy’: ‘Say to General Hancock for me, that I have done him, and you all, a grievous injury, which I shall always regret’. Was he apologising for breaking his oath to serve the United States, or was it a more personal apology for perhaps under-estimating Hancock’s troops?
Pickett’s Charge is particularly subtle on Pickett’s own behaviour. Col. Eppa Hunton, of the 8th Virginia, repudiated his commander; he would never even call the event ‘Pickett’s charge’. Lee, blaming himself, was less harsh, though Pickett was never again promoted. And at the battle of Five Forks, just before the end of the war in April 1865, Pickett’s division was again slaughtered; this time he was enjoying a ‘shad-bake’ with some fellow generals away from the battlefield; his disgrace was not made public, 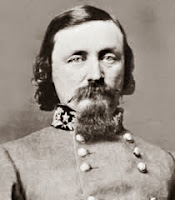 but he was removed from command, and from Lee’s sight. Pickett, with his long ringlets and sharp angled face, reminds us of two other American heroes, Poe (like the author, Pickett courted, and married, a teenaged girl) and Custer, as flamboyant and also foolhardy.
Stewart’s account is engrossing; he has adopted the mindset of the time, which is something I find particularly fascinating. Had I read this book in 1962, I would have automatically understood the points of honour and duty which the battle brings to the foreground. Following the flag, not surrendering the colours, giving your word of honour, all had a meaning, even to me as a boy then. Stewart does not romanticise these, but he clearly understands them in the context of their times. I suspect now that meaning may have faded, that a modern audience will find much of this behaviour as incomprehensible, in the personal sense, as they do in the political—that is, fighting a war to keep men enslaved. Although there can be no doubt that slavery was the reason for the war, Lincoln was, at least until the Emancipation Proclaimation, and always for public consumption, fighting primarily to keep the Union together. And though it was slavery that caused the South to secede, many Confederates were indeed fighting for concepts of states’ rights, more abstract than slavery, or for the honour of the places where they were born, out of loyalty, not racial conviction.
Thus Pickett, no hero on the battlefield, becomes a hero in Southern myth, and if we know anything a century and a half on, it is that those myths die hard. Many thought the Civil War finally ended in that centennial period; in 1965 Lyndon Johnson, a Texan, signed into law the Civil Rights act. We know now that what really happened was a mere realignment of the forces arrayed against each other. Fifty years later, we find an America whose progress is brought to a standstill by representation as disproportionate as when slaves counted as 3/5 of a person for allocating the size of Congressional delegations. We have a newly segregated South, full of ‘Christian’ academies outside the integrated public schools, and gated communities outside the provenance of municipalities. We have elected a black man President, yet his reception from a part of the country ideologically, if not always geographically, descended from the Confederacy, has been hostile, a well-funded and proportionately over-represented in the modern legislature of media, that has spent the past five years refusing to accept the leigimacy of an Obama administration. It is a veritable deconstruction of reconstruction.
And a far cry from Abraham Lincoln, who was one of Obama’s conscious role models on his path to the Presidency, and whose ideal of conciliation and reconciliation seems to be Obama’s determined policy, long after everyone else has realised his enemies are no more likely to be placated than South Carolina was in 1861. It is perhaps most significant for us today to realise that just as Pickett’s Charge is the high-water mark of the Confederacy, the Gettysburg Address, not the battle itself, nor the surrender at Appomattox, remains the high-water mark of the Civil War for the rest of America. 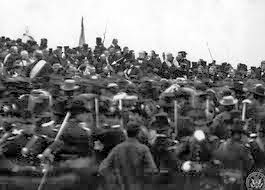 The Gettysburg Address remains the single most powerful speech in American history, and a model of concision for the world. The people who came to Gettysburg for the dedication ceremony might well have come to hear Edward Everett, a renowned orator, and he gave them their money’s worth, speaking for two hours. Everett later wrote to Lincoln, requesting a copy of his speech, saying Lincoln had said better in two minutes what had took him two hours. The Everett copy is one of the five known to exist. Garry Wills’ Lincoln At Gettysburg: The Words That Remade America (1992) is a fine exegesis of the speech itself, and its effect: it is a commonplace now to note that before the Civil War, United States was not a collective noun in the American sense; it still took a plural verb. After the Civil War, it became a collective, requiring the single verb a united group deserves. That was down to Lincoln, but at Gettysburg he made a simple declaration—we, the people, could not consecrate the battle ground, the dead and living who fought there had already done that. We who did not fight there could only apply ‘increased devotion’ and ‘highly resolve that these dead shall not have died in vain, that this nation shall have a new birth of freedom’. In many ways today, his words, stirring as they are, ring hollow even as they are recalled and intoned, because we are still waiting.Both sides of America must endure their own legacies of failure.