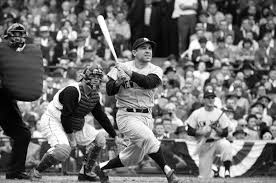 My obit of Yogi Berra is up at the Guardian online now; you can link to it here. It should be in the paper paper soon. It is pretty much as I wrote it, so follow the link to read it, but there are a few things I didn’t have space to say, and a few that would not matter to the British audience.

One of them I got off my chest on the BBC World Service’s Newshour this afternoon, at 13:55 on the clock, if you go to BBC IPlayer or link to it here. I did a more brief interview with the World Service’s Outside Source in the morning: you can listen to that here. It was recorded off my mobile phone as the train pulled into Waterloo Station.

I mentioned in the obit his feud with George Steinbrenner: you can link to the obit of him I wrote for the Independent here you’ll get an idea of what I thought of Steinbrenner if you read my IT intro and link to the obit of here. Berra was treated badly by the Yankees in his first go-round as manager; the team rallied around Yogi to win the pennant, and the Cardinals may have wn the ’64 World Series, but they were a far better team. But Steinbrenner was something completely different, and Yogi deeply resented the lies and the public humilation which were Steinbrenner’s meat and potatoes. There wasn’t really that much discussion of his managerial style, but he was baseball shrewd, prone to play hunches, and epitomised what Tom Boswell once referred to as the ‘glorified cruise director’ whose job as manager was to keep everybody happy for 162 games.

It was Suzy Waldman of WFAN who got them back together, but I always thought the ‘kindler, gentler’ George Steinbrenner of those days was a pretty shallow facade.  Yet David Cone pitched that perfecto on Yogi Berra day in 1999, as if to echo Don Larsen’s in the 1956 World Series; has there ever been a better picture of spontaneous joy than Berra’s leap into Larsen’s arms?

I pointed out that Berra grew up in St Louis’ ‘Dago Hill’, now known, in more politically correct times, as ‘The Hill’. But it was the neighbourhood which produced the core of the 1950 US soccer team, guys who played for Simkins Ford in the St. Louis league. I got the feeling Berra would have liked to have played for the hometown Cards (‘hometown’ got cut from the piece in the Guardian, go figure) but you have to feel he was born to be a Yankee. 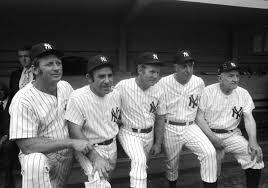 Where Mickey Mantle was incredibly handsome, Whitey Ford slick as a hustler at the Metropole, Yogi was like a collection of spare parts thrown together; R2D2 to Mantle’s Luke Skywalker and Ford’s Hans Solo. But as Yogi once said, ‘you don’t hit with your face’.

I wrote in the piece that in 1950, Berra at 597 at bats and struck out just 12. For a guy who swung at almost everything, that boggles credulity. He walked only 55 times, but hit a career best .322 and had an on-base percentage of .383, also a career high. He finished third in the MVP voting, behind Phil Rizzuto and Boston’s utility player Billy Goodman.

Bill James wrote about Berra’s body type, which wasn’t that unusual in baseball. He was more or less 5-8 180 in his prime, heavier later; James says Roy Campanella was 5-9 205, Roger Breshnahan and Smoky Burgess roughly the same. Hack Wilson and Kirby Puckett are others James mentions in the outfield. Short and powerful is good for baseball.

I also owe James for the insight into that 1950s Yankee dynasty: Casey Stengel had Mantle in center field, he had Gil McDougald who could handle any infield spot and allowed Casey to stack his lineup toward his hunches, and he had Berra who never had a really bad year and was not necessarily a great catcher, but a great handler of pitchers, hit like an outfielder, and caught both ends of double-headers 117 times. Look at virtually all the great catchers and you’ll see a pattern of good and bad years; Campanella seemed to alternate them. This is due largely to the wear and tear, if not injury, at the position, but Berra was remarkably durable and consistent. Cochrane, Bench, Pudges Fisk and Rodriquez, Carter. OK maybe 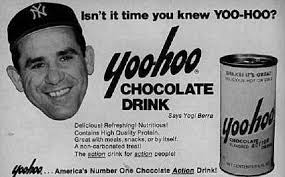 not Mike Piazza, but he wasn’t a very good catcher. Casey was once asked what the secret of his success was and he said ‘I never play a game without my man’, and his man was Yogi.

I never bought into Maypo or YooHoo, but I bought into Yogi. I was never a Yankee fan, but I liked Mantle, enjoyed Stengel, appreciated Ford, admired the way they won, and loved Yogi. Almost everyone did. New York was the center of the world in the 1950s, and Yogi was the guy who brought the glamour of the city down to earth. It wasn’t over until it was over. RIP Yogi.