Having built the 24 Hours Race Car and not been overly impressed with the functionality I decided to remedy that situation by making it remote control.

Out of the box the car is set up for motorisation with a compartment in the nose for the battery box but the preprepared motor location is intended to drive the door and engine cover.

In addition to the battery box and motors the “Power Functions” range contains a two channel remote control and a servo which provides everything needed.

After stripping out most of the sets of axles that weaved across the bottom of the car to make the doors and engine cover lift from a single dive there was enough space to start working.

It took a few attempts but I managed to get the motor drive shaft to connect into the V8 engine crank shaft which then goes through the diff into the rear wheels.  The downside of this is that the pinion is under a lot of torque as it meshes with the ring gear and can slip off the input shaft.

With the “hand of god” steering wheel and linkages removed the steering servo fitted into the cockpit and interfaced cleanly with the pinion shaft. 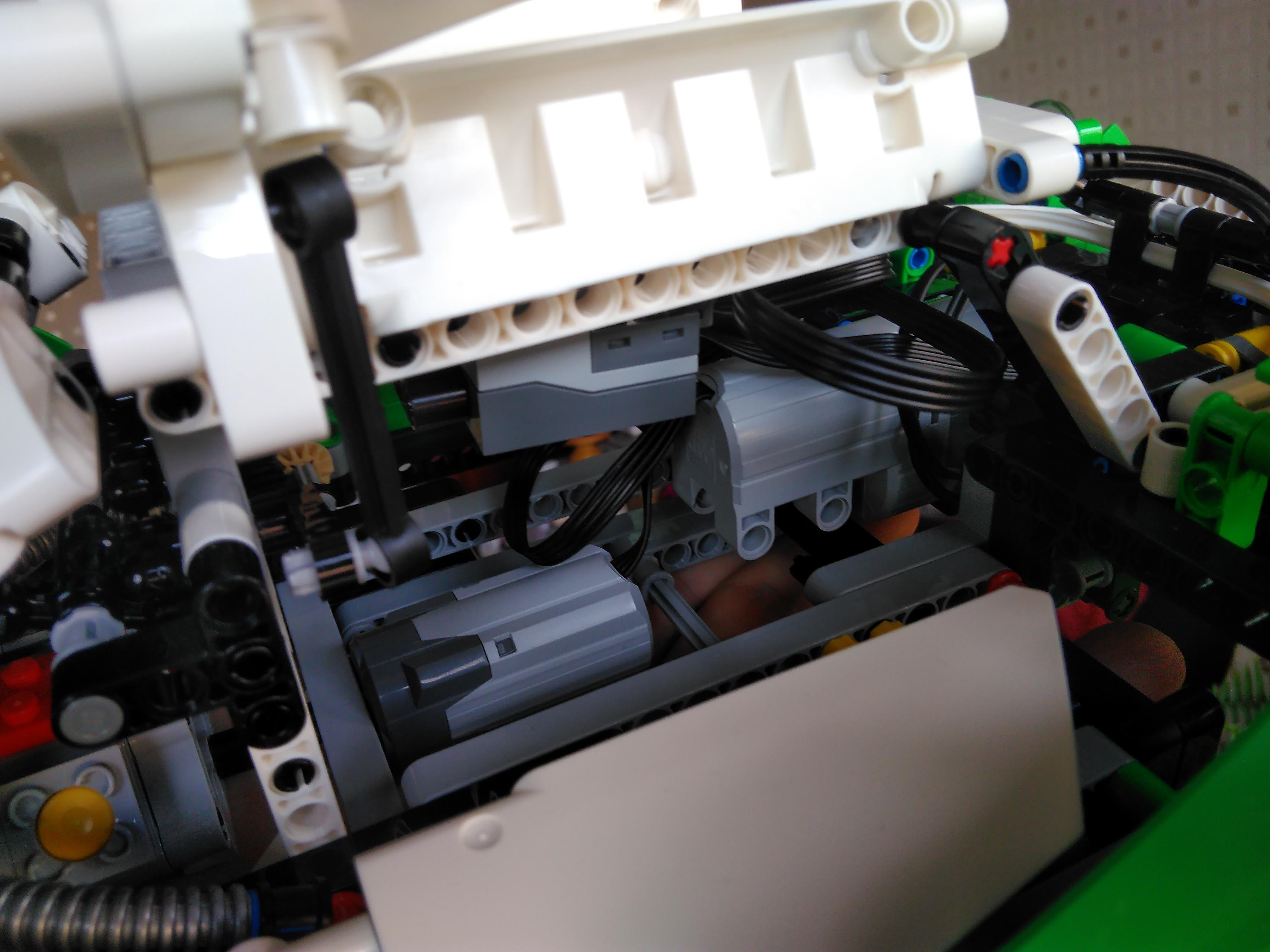 The IR receiver for the remote control fits in where the steering wheel was previously located which gives good reception. 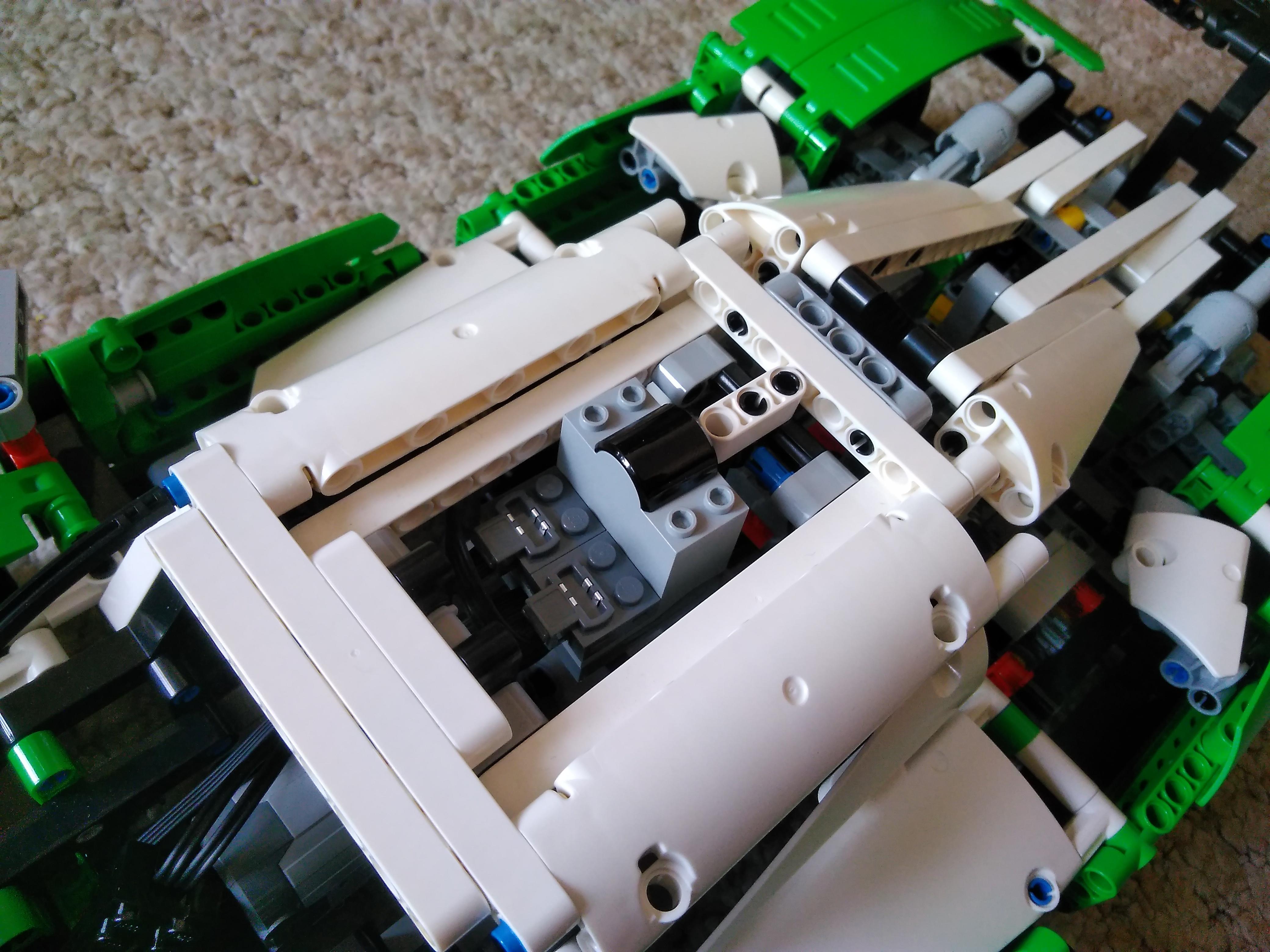 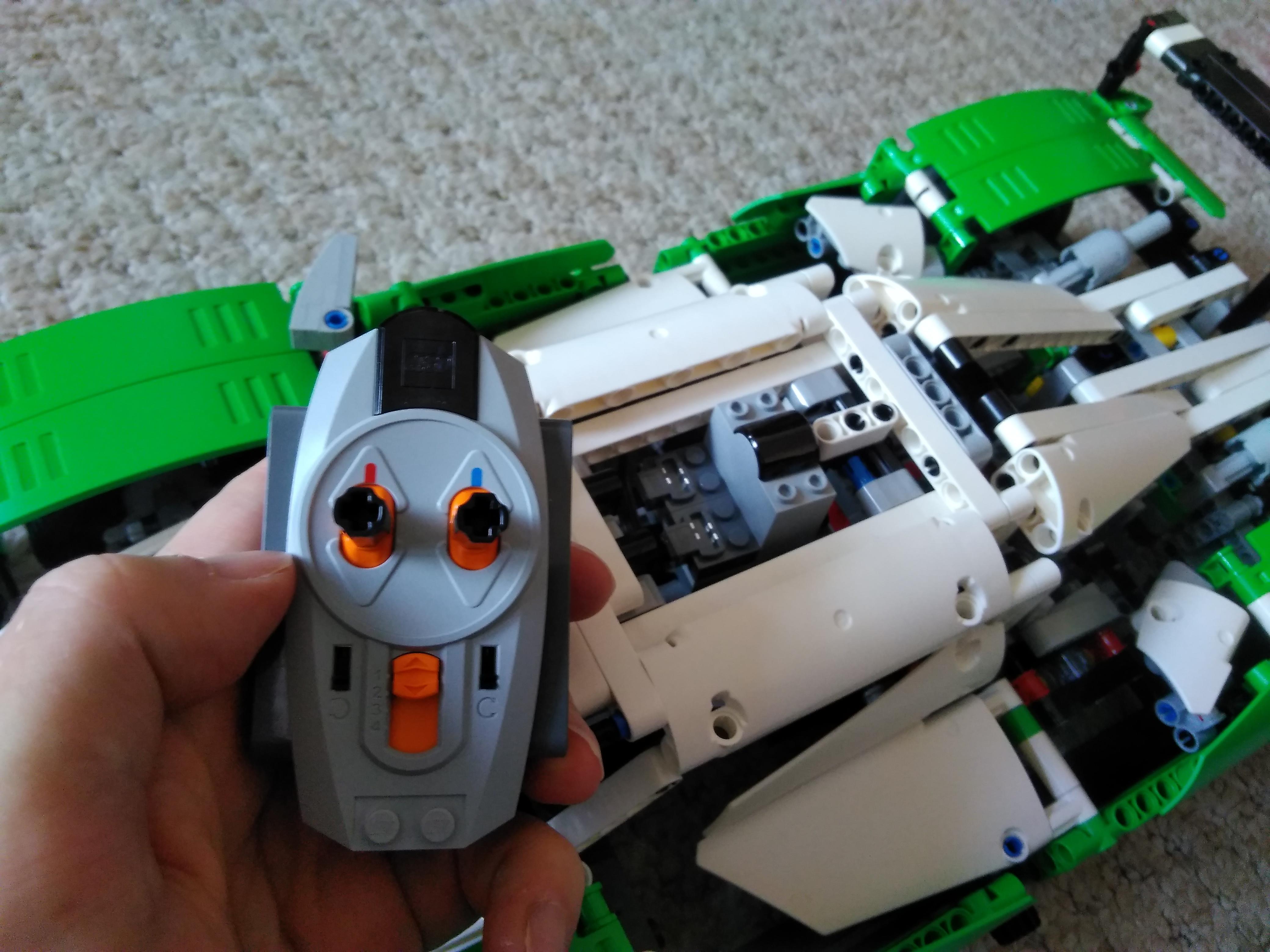 Since I’d removed all the cross linked axles to make space for the motors the doors and engine cover no longer operated.  However, as the actuators were still there, I re-worked the drive shafts so rather than going from a drive at the rear of the right side pod to a clutch at the front of the left side pod and back to the actuators on either side at the rear they now have individual drives at the rear of each side pod via the shortest route possible into the actuators. 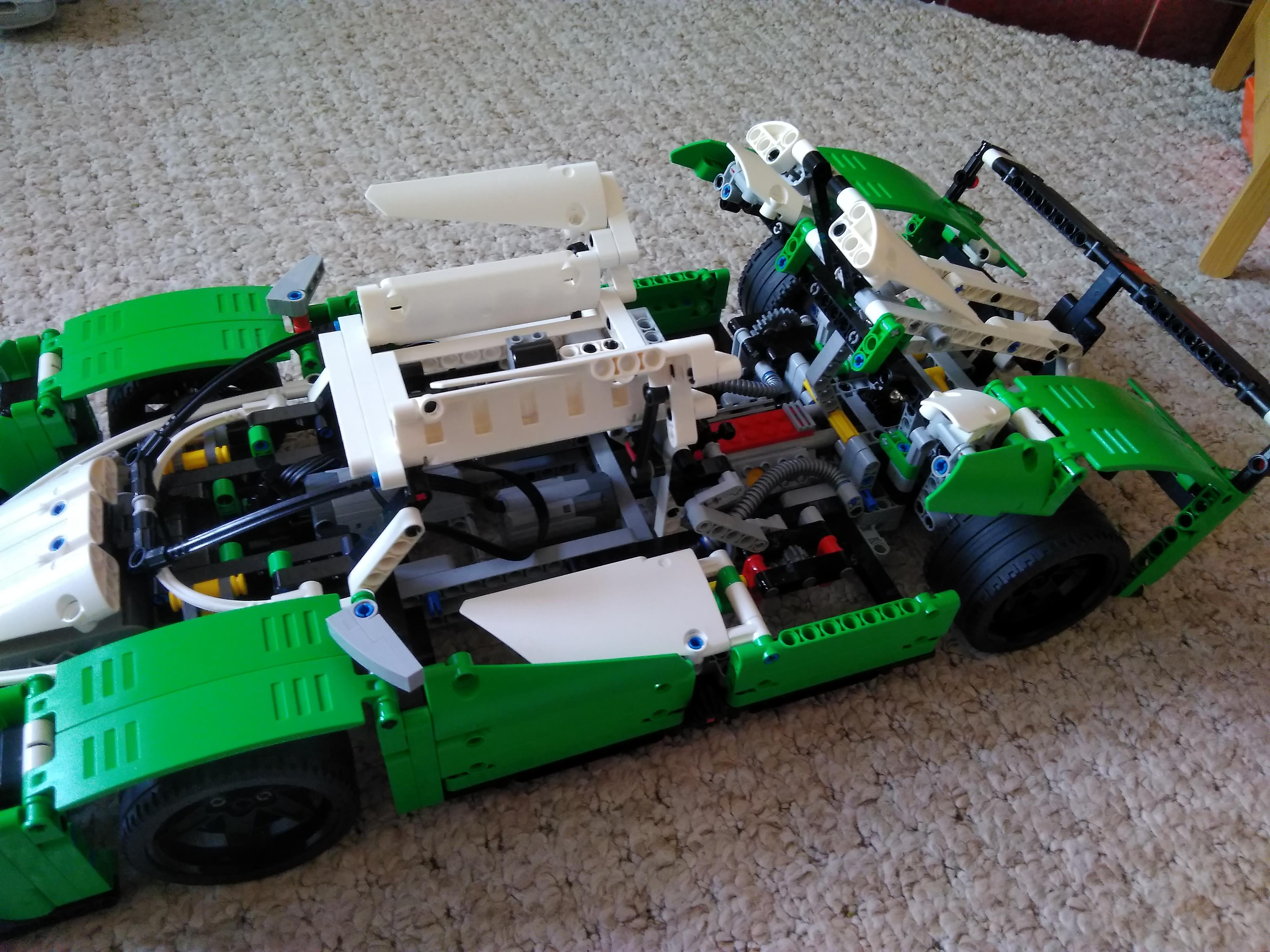 The end result is that I not only have remote control drive and steering but I’ve retained and improved the existing functionality for the doors and engine cover.  Oh, and the headlights light up.

My favourite Technic Lego set from my youth was the Big Car so its contemporary equivalent – especially being an LMP1 racer – had always appealed to me.

It’s a sizeable kit with a lot of parts and a 250 page instruction book.

This is the first time I’ve really encountered the studless style of Technic and I have to say it’s more like Meccano than Lego as far as I’m concerned.

It took most of an afternoon and evening to assemble it following the instructions. 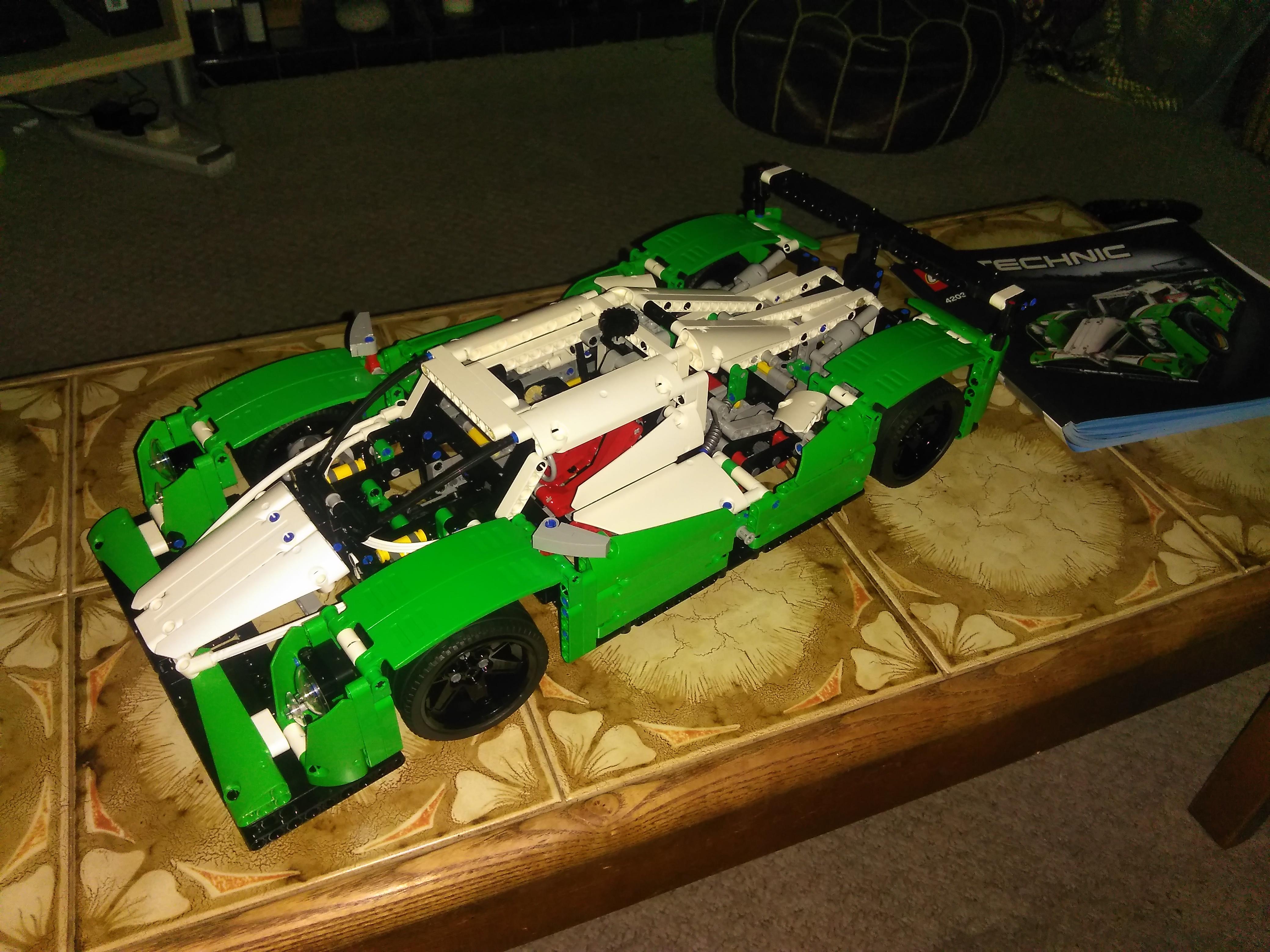 Whilst it looks very good – there’s no question it’s modelled on an LMP1 endurance racer – I wasn’t particularly impressed with the functionality.  About the only thing that wasn’t present on the model I had 30 years ago is the front suspension.

There is a steering wheel but it’s not connected to anything, the steering is controlled by a cog on the top of the car – something I’ve never been too keen on.

The engine cover lifts and the gull-wing doors work from a single cog on the right side, switched by a clutch in the left side pod.  This is a nicely executed feature but there are an awful lot of cogs and axles around the cockpit and side pods.